When Your Out In The Woods

Looking For Mushrooms and your not sure if you are picking a safe mushroom;

Remember these few rules I use

Worms In The Mushroom is a safe way to tell it is ok to eat, but it is an old mushroom and still good to

eat with or without the worms.

Any White Mushrooms that I have picked that has the yellow or green or red color,

STOP and Do Not Touch or EAT, without having it tested FIRST!!!

Most Famous and Deadly of All Poisonous Mushroom I Know Of

"Most lethal Poisons found in nature are in This Mushroom". These toxins work by slowly shutting down

the liver and kidneys. Often the victim will appear sick at first, and then seem to get better. Unfortunately the

amatoxins are still at work, and death may occur anywhere from a few days to a week after ingestion.

This poison knows no real antidote beyond treating the victim with an extract of milk thistle.

Milk Thistle protects against liver damage from toxins, and is one of the treatments for

Despite this treatment, it's said that one cap of a death cap is enough to kill. Given the danger, we'd better

Young examples of amanita phalloides Between 3 to 6 inches across
Convex initially but flattens with age, often sticky when touched
Color is usually a shade of yellow to green, but sometimes white or brownish
White gills underneath the cap that don't run down the stem

Often a ring around the stem right below the cap. This ring is the remnant of the partial veil, a piece of tissue that protected the mushroom's

gills as it grew.
Also present is a white sac around the base of the stem. All amanita mushrooms start their lives as small buttons in the shape of an egg.

This egg-like covering is actually a layer of tissue called the universal veil, or volva.

Because they form as a small button, an amanita may sometimes be mistaken for an edible puffball. This is why it's essential to slice a puffball

open before eating it. Puffballs are white and solid on the inside with no gills. If you see gills, you may have an amanita on your hands.

Once the mushroom has grown, the sac-like remnants of this universal veil are still an important identification characteristic. It's often

underground so you may have to dig carefully around the base to find it.

However,never assume that you don't have an amanita mushroom just because you can't find the sac. It may have disintegrated or broken away.

Use all features for poisonous mushroom identification, not just one!!!

The Death Cap Mushroom, like all Amanita species, is suspected to be mycorrhizal. This means the mycelium of the mushroom forms a

symbiotic relationship with the roots of trees. For this reason they are found on the ground in the woods, although occasionally

they will occur in grassy fields.
Often found near oak and pine trees. Sometimes seen near other hardwoods such as chestnut, beech, birch, and spruce.

Late August through November, late-summer to late fall in your area.

The Death Cap Mushrooms is originally a European mushroom, and is found throughout Europe and parts of North Africa.
The species was introduced to North America and is most often seen in California. However, there are reports of it in many other states

including Pennsylvania, Ohio, and parts of the East Coast. Click here for a great article about a biologist studying the this mushroom in California.
Shipping wood, lumber, and live seedlings has introduced the species to other parts of the world, such as Australia and parts of South America.

The Death Cap, or some other poisonous mushrooms, lives where you live!!!

If You Think You Have a Good Mushroom, Test by Tasting a piece of the stem and Head of the mushroom.

even a half hour later and wait to yo have the Mushroom Tested.

And do this test sevaral times if you are new to picking mushrooms.

I have picked over 30 different Mushrooms in Alberta-B.C. Saskatchewan, and Manitoba, and plenty of them were either a

Here are a few of my Favorite Mushrooms That I pick in Alberta in the foothills and The Rocky Mountains.

I WILL HAVE MORE INFORMATION SOON ABOUT PICKING MUSHROOMS.

Geno'a Favorite Mushrooms To Eat Below

before they flatten out and look black and kind of slimy)

cream or milk and thicken sauce

Chop the onion, and roughly chop the garlic, and sweat them off in some olive oil, until translucent.

Roughly chop the caps of the mushrooms, and chop the stalks reasonably finely. Add to the onion and garlic,

and add the butter. Season well with salt and pepper, and fry off. This stage may take a while, as you want to

try to drive off the black moisture that will seep from the mushrooms.

Add the Pasta-Noodles, to give a bit of bulk and or cooked potatoes.

Add stock-butter, and the chopped stalks of Celery if want. Bring to a boil, then simmer for 5-10 minutes.

Use a food processor, or with a stick blender until it is as smooth as you like your soup.

Return to a pan, and add the sour cream-sauces. Warm, but do not boil. Taste, add salt-pepper-spices, and serve.

How to Identify Morel Mushrooms

The two most important features to examine when trying to identify a morel mushroom are the cap shape and whether the interior is hollow.

Morels have a very distinct cap. Fairly uniform, they appear ridged and pitted inwards. See the picture to the right for a close up of a morel cap.

On most morels the cap will be attached to the stem, not hanging free as with Amanitas and many other mushrooms.

There are The inside of a Hollow Morel Mushroom species known as "Half-Free Morels",

where only the bottom of the cap hangs freely from the stem.

These can be harder to identify so discard if you have any doubts.

The next important identification step is to slice the mushroom lengthwise.

A True Morel will be hollow inside from the tip of the cap to the bottom of the stem.

Other features that may aid in Morel Mushroom Identification.

Nearby Trees. Morels are known for their relationships with trees, particularly ash, elm, and apple trees.

Time of Year. These are spring mushrooms, fruiting anywhere from February to June depending on where you live.

Cooler areas will see fruiting later in the year (May-June).

Cap length. In most morels the cap is longer than the stem. This may not be the case with half-free morels,

so be sure to check cap attachment as well. 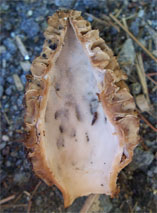 Cap is covered in pits and ridges. It appears to be pitted inwards.

Cap is more uniformly shaped and often longer than the stem (not always true with half-free morels).

Cap is attached directly to the stem.

With half-free Morels Half of the cap is attached to the stem, with just the bottom half hanging free.

If you slice the Mushroom lengthwise the inside will be completely hollow. It looks like a "morel mold".

Cap is more wavy and lobed. It appears to be bulging outwards.

Cap often has an irregular shape and appears "squashed", almost as though it has been stepped on.

Cap hangs freely off the stem. If you slice it lengthwise you'll see the cap is attached to the very top of the stem.

The Inside is Not Hollow

It will be filled with some cottony fibers or chunks of tissue.

For More Information On Mushrooms

Look These Books up on The Internet or Your Local Library

All That the Rain Promises and More: A Hip Pocket Guide to Western Mushrooms 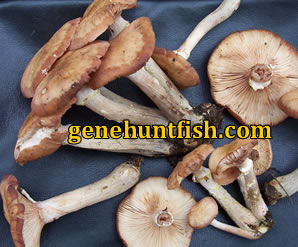 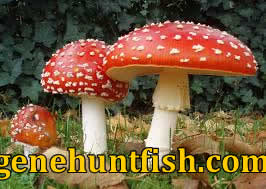 Gills that are Thin and White.

The underside of this example shows the white gills of an Amanita.

another thing to look for when trying to identify Poisonous Mushrooms.

No Page on Poisonous Mushrooms would be complete without discussing the death cap's deadly cousin, the destroying angel.

The term "Destroying Angel" actually refers to a few all-white poisonous mushrooms in the Amanita genus. They are:

Amanitas usually start appearing during the second half of the season, in summer and fall. Look for them in

woodlands on the ground.In many places they are quite common.

Amanita Virosa is known as the "European destroying angel". There is some disagreement as to whether this mushroom exists in the United States.

The Destroying Angel is very similar to the death cap in terms of identification. The biggest difference is that they're all white, with no green or yellow tint.

They're recognized by their rounded base, white color, and smooth cap. One bite of these may contain enough amatoxins to kill!

It's important to learn how to recognize Amanitas (especially the death cap and the destroying angel) if one is going to start eating wild mushrooms.

Please Again Do Not Eat Any Mushrooms If You Are Not Sure!!!

Pick Them and Take Them To The Goverment Labs For Testing.

It Is Best To Be Safe.